With the increase of burglaries across Ripon and North Yorkshire, here at Re-Entry Locksmiths, Horrogate, we thought we would take some time to highlight some of the method’s criminals use to get into your house. We are also going to provide you with some common sense solutions on how to prevent this from happening to you and your loved ones.

Your average burglar is likely to be someone who is desperate to create some quick cash for themselves, whether that be to feed a drug addiction, or just funding their life of crime. This means that they are likely to be in a hurry, not very well equipped, and opportunistic. Therefore a sloppy or haphazard approach will mean they are likely to leave evidence, or if you have taken measures be unlikely to gain entry.

An increasingly common modus operandi (MO) for domestic burglary is the europrofile lock technique. The use of this has drastically risen in Britain over the last five years, principally due to the manufacturers of new housing using cheap locks in their doors. The suspect takes a set of mole grips and places them over the lock barrel. With a turn, a bump and a snap, the bolt in the door lock shatters, rendering it inoperative. The door, handle and lock appear undamaged on a cursory inspection. The suspect then can gain access. This is a fantastic reason to make sure your home security is adequate: an experienced thief can get in this way, leaving minimal mess, in less than thirty seconds.

A more uncommon, but still utilised method is a bump key. A bump key is a special key that has been filed down to allow it to penetrate most of the pins in any particular lock, if it is whacked in to place. These have to be specially made, and won’t work on highly-secure locks. Nonetheless, it affords a thief a means of rapid access.

Forced entry is next on the list. Operational police officers have told us they’ve seen examples of thieves kicking through a thin external wall down between a shed mounted to the exterior of a building to gain access. But more common is attacking the front door itself, usually with a jemmy or crowbar. This technique literally uses physical force to prise the door open, but leaves a lot of mess, is noisy and attracts unwanted attention. Tell-tale marks that a jemmy has been used includes bent locks, a splintered or warped door-frame, and lots of debris.

The final, and crudest method for getting in the door, is brute force. It is surprisingly easy to kick a wooden door with a flimsy lock down, but again — it’s messy and noisy. Less so is a modern UPVC door, most of which have a steel core. In this case it is easier for a thief to kick a panel through in the bottom or top half of the door, and crawl through, rather than attacking the lock or frame directly. The most uncommon technique here would be the use of a battering ram. Operational officers report that this MO is extremity rare.

Windows too can be attacked in a variety of ways. The most common MO here, after the sneak in, is to use some sort of tool to prise them open. Here, we’re looking at a crowbar or jemmy again. Thieves also use screwdrivers, to remove the beading from the frame, and literally pull the window out of its mounting. Sometimes, although more rarely, a glass cutting tool can also be used. These methods are fairly quiet and discreet as they cause minimal damage and aren’t immediately obvious on a casual inspection.
More brute force methods include the obvious brick through the window. The advantage for the thief here is that he doesn’t have to carry anything to the crime scene; a rock from the victim’s own patio is commonly used. The disadvantage is of course the noise made. It’s useful for forensic investigators, as using smashed windows as a point of entry usually means there is lots of nice jagged glass lying around that the thief might cut themselves on. If they do, they’ve incidentally left some fairly irrefutable trace evidence, in the form of their DNA at the crime scene. The destroyed window may even retain a few fingerprints, or tear a few fibres from the suspect’s clothes.

The final category here in our forced entry section encompasses every other way a thief could force access to your dwelling. Don’t worry about locking or shutting your first floor windows? Well you should, because thieves can and often do drag your wheelie bin to the side of your kitchen, climb onto your flat roof, and gain access that way.
Other ways burglars enter using less obvious methods include the removal of roof tiles, attacking masonry from a secluded spot with a hammer, chisel or industrial tools, or even digging elaborate tunnels! Determined thieves have even been known to dismantle chimneys to gain access to attic spaces or the body of houses.
As we said earlier, the possibilities for a determined thief are almost infinite. Although uncommon for residential houses, commercial premises are often ram raided, which involves driving a vehicle through a wall or shutter to gain access to a building. Again, it has even been known for minor explosives or welding equipment to be used to gain access.

​As we explained earlier most burglars are likely to be an opportunist so the main preventative method is to ensure that those opportunities don’t exist for them. Keep windows secure, upgrade all your lock security, also a simple alarm system or CCTV system linked to your TV or smart device. If you have had a recent experience or have some advice for your community share them with us here on the comment section below. Stay Safe. 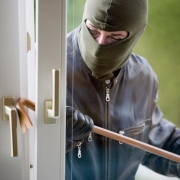 Want to join the discussion?
Feel free to contribute!

This is a notification that can be used for cookie consent or other important news. It also got a modal window now! Click "learn more" to see it!

We may request cookies to be set on your device. We use cookies to let us know when you visit our websites, how you interact with us, to enrich your user experience, and to customize your relationship with our website.

Click on the different category headings to find out more. You can also change some of your preferences. Note that blocking some types of cookies may impact your experience on our websites and the services we are able to offer.

These cookies are strictly necessary to provide you with services available through our website and to use some of its features.

Because these cookies are strictly necessary to deliver the website, refuseing them will have impact how our site functions. You always can block or delete cookies by changing your browser settings and force blocking all cookies on this website. But this will always prompt you to accept/refuse cookies when revisiting our site.

We fully respect if you want to refuse cookies but to avoid asking you again and again kindly allow us to store a cookie for that. You are free to opt out any time or opt in for other cookies to get a better experience. If you refuse cookies we will remove all set cookies in our domain.

We provide you with a list of stored cookies on your computer in our domain so you can check what we stored. Due to security reasons we are not able to show or modify cookies from other domains. You can check these in your browser security settings.

These cookies collect information that is used either in aggregate form to help us understand how our website is being used or how effective our marketing campaigns are, or to help us customize our website and application for you in order to enhance your experience.

If you do not want that we track your visist to our site you can disable tracking in your browser here:

We also use different external services like Google Webfonts, Google Maps, and external Video providers. Since these providers may collect personal data like your IP address we allow you to block them here. Please be aware that this might heavily reduce the functionality and appearance of our site. Changes will take effect once you reload the page.